Skip to Content
Home Multi-State Trips Out in the middle of nowhere, then I took a left!

and drove for some 20 miles, all on logging roads. The drive was to find some waterfalls, which after I found them, I have no idea, how or why, anyone found these to begin with, no idea.

There is no reason that I can think of that these falls where found in the first place, it doesn’t make any sense to me. Now if they were visible from the roads, and loggers could see them, ok, I’d get it, but these falls are about 1/4 to 1/2 mile hike in the woods, and this only after you’ve drive some 15+ miles in the middle of nowhere.

That being said, they are wonderful and well worth the drive, just be ready to think about turning around 5 or 6 times while you are driving to get there.

I will say, the roads, even being all dirt, are 10 x’s smoother then the roads in my neighborhood, and that is sad.

No cars or trucks, no cell phone service, it’s just you, the woods and who knows what or who else is out there (can you say Bigfoot?)

These pictures don’t do the area justice. It’s hard to say, but I’m guessing the main falls are 25 to 35 feet tall.

I wanted to go around the falls but the thought of falling, twisting an ankle or worst yet, breaking an ankle and then having to get out of here, well it help keep me from doing anything stupid. 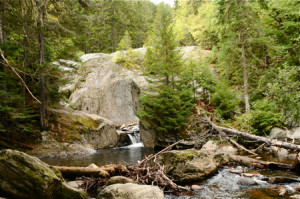 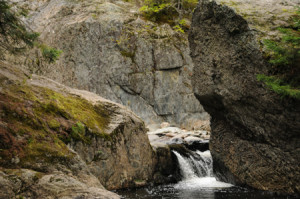 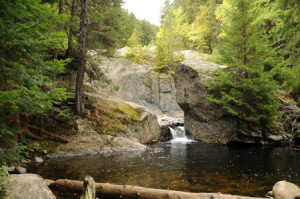 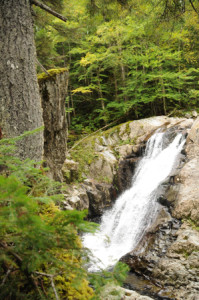 For those adventurous souls. He just need to drive down Magallaway Road, which is the left just after the Treasure and Treats Country store on the Daniel Webster Highway in Pittsburg, NH. The falls are called Garfield Falls

Garfield Falls– The falls are on the east branch of Dead Diamond River very near the Maine Border.  Nature has made a magnificent, beautiful spot for fishermen and swimmers alike.  Located on Route 3 in Pittsburg, go north beyond First Connecticut Lake until reaching Magalloway Road.  G0 15+ miles from Route 3, look for the sign on a tree that says Garfield Falls; go about another 1/4 mile down that road and then about a 1/4 walk through the woods

You can also find some reviews on TripAdvisor: