Skip to Content
Home Multi-State Trips On the road with our grandson, VA and back …

Wow, 4 days and it only seemed like 2. We picked up where we left off  last year. Ok, so let me explain a bit. We generally take a small road trip / vacation with our grandson each year (and hope to do it with our grand-daughters real soon), and last year, while it was planned, it didn’t happen because at the last minute, my wife got called to jury duty. This was a bit of a disappointment to our grandson, but I did step up and spend a few days with him on a shorter road trip. we ended up at Morrette’s King Steak in NY for lunch and stopped and played frisbee golf at a few places and stayed over-night in VT, but I digress.

So this year, no jury duty and we added a day to the trip to make up for missing last year (and for my wife’s comfort). We started out Tuesday morning with a goal of getting to Harrisburg, PA for our first nights stay, and yes, for those who are wondering, and or those who know me, I did stop and feed them (Inside joke, ask me about it). Oh, are goals for this trip were, Luray Caverns, Natural Bridge few local farmers markets / malls and the over to Rough and Tumble Museum (steam engines galore) then to Stroudwater, PA and stops at one of the largest candy stores in America and over to a pie making store and  bushkill Falls, then home.

Below are a few pictures from our first (not known to these 2) stop. Which was at Shikellamy State Park over-look scenic area (a must stop if you are in the area). 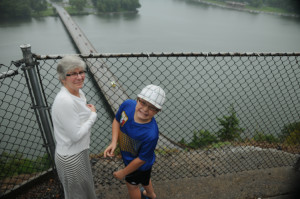 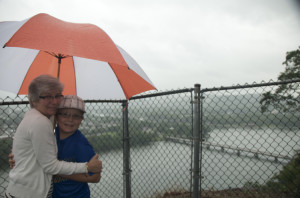 A photo from the web site: (click on photos, to make larger) 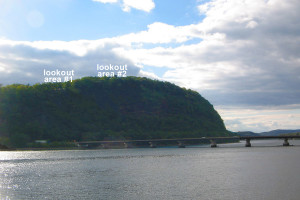 From here it was on to our first hotel for the night, and that didn’t go as planned either.

I had printed out the information to the Comfort Inn downtown Harrisburg, but I’ll be damned if any of us could find it, once there?

Yes it was dark, yes my wife was tried and miserable  (oh did I mention, she had a cold that lasted the whole trip:( ). In any case, we ended up at the Holiday Inn HARRISBURG-EAST , which was a fine stay, great no, but more then good enough after the end of a long day. Now don’t get me wrong, it had some strong points, like one of the largest TV’s of any hotels we have been in for quite some time (maybe  a 36″ or 42″ flat screen tv). It was reasonably quiet, comfortable and clean and I guess in the end, what more can you ask for.

The next morning, which was to early for my wife and grandson, got started around 7am with showers for everyone and breakfast which was real good and real expensive (for a breakfast). 3 people $45.00, but hey, what’s a vacation without a few nice, over priced meals.

After breakfast we headed back to our room to freshen up, pack and be on our way.

Now I was hoping getting onto the highway was going to be a short drive, but nooo, not me. I had to drive all over the freaking place just to get back on track. Now this isn’t a big deal from me, but my wife, well let’s just say, she doesn’t like it, when our day starts out this way. Now there is some good in this, and that is we get to see places and parts of the city we won’t normally drive thru, and hey, that’s not bad… right? I will say, some of this was the GPS, some of this was the road signage, and yes some of this was me. I will say, that this does give some credence to up-dating the GPS software whenever possible even at the high costs they get for up-dates.

Ok, so where was I, oh yeah, we were trying to get on the highway and get to Luray Caverns as quickly as possible. It took about 3 hours +- but we finally got here, and now it’s time for our 2 hour tour (you did sing this in the key of Gillians Island right).

Unlike the elevator ride at Howe Caverns in NY, Luray’s is a steep set of stairs to climb down, but once you are down there, it sure is nice. Not sure how much bigger, but it is bigger.

I’ll get back to the story later, I’ve got to get some work done, after all we leave in 2 days for another little world-wind trip.