Boy did I luck out.  The weather was great, my grandson was awesome,  clients were nice and I met some wonderful folks who hopefully will become clients soon – what I call a win, win, win.

Trip started out Saturday morning early, with a lunch stop planned for Morette’s King Steak in Schenectady NY, we had to be on the road early. We arrived there just about noon time. We both had a King Steak Sandwich, mine had Cheese, Mushrooms and tomato sauce, (which is the way they are known for serving this sandwich) my grandson went with just cheese (he HATES soggy bread), and a small order of fries.

My grandson (Dominik) did ask to try mine, and decided, the next time he’d have a bowl of sauce on the side:). We were the only 2 there at first then a few other folks arrived. A couple from MA, who I over heard ask “So what’s good here?” the waitress informed them that they were known for their steak sandwich, and they said “well then, bring us 2 please.” I was pretty sure they ordered them without sauce, so I went over and told them to get a side of sauce as this was a big part of this sandwich experience – they did and thanked me for it as we were leaving. 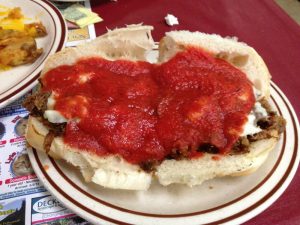 We left there and headed for Norwick Classic Car Museum which was about an hour and a half drive west from where we were. This turned out to be a Great find! A wonderful, large collection of antique cars, trucks and motorcycles (some 185 pieces strong) and most (170 of them) donated by a local farmer? I wonder what he was growing:)

Any one remember the famous scene from a James Bond movie that used this car (the AMC, 1st car below)? 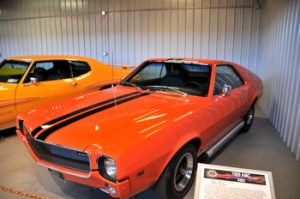 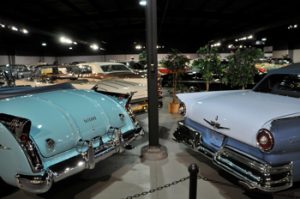 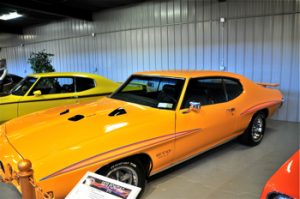 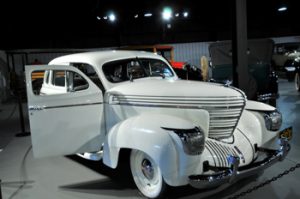 There is just about something here for everyone. If you are into cars, make this a Must stop this year.

After this visit we headed towards our first frisbee golf course. This gave us a great chance to stretch our legs. This course was located at a local church playground. It is both a 9 hole and a 27 hole course. Neat clean well designed and fun to play. Oh, it was in the mid 70’s and we were starting to feel like this was going to be a great few days away. After this we headed towards the area we planned for our first nights stay. We decided not to make any reservations, this way we could stop when we were ready and seeing it wasn’t any special time of year, and not in any touristy types of areas, this seemed like a great plan.

We had decided when we left, that we would NOT eat at any fast food or franchise restaurants, so now was going to be our second big test, could we do it. I checked at the front desk to see what was in the area, and if any of them were opened. I was about opened, because it was 8ish, and this is a small town. The young lady at the front desk said there were several places, but most if not all were closing soon. I asked which had the most to choose from with local flair and she said “Twigs”, which turned out to be a fine choice.

is a nice local pub/restaurant with many offerings. I had Chicken Parmigiana with a plate of tomatoes with house dressing and Dominik had Chicken Fingers. Everything was nice and hot and tasty and reasonably priced. After the meal I said we needed to walk it off before calling it a night, so we walked the downtown area. A nice downtown with enough shops to get what you needed. Clean with nice wide sidewalks and clean business store fronts. Most everything was closed, except on the outskirts of town, there the Rite-aids and such were still open.

Before heading back, we went to find a store to get juices and pastries for the next morning and found a local convenience store which had just what we were looking for.

The next morning after a great nights sleep, we checked out the free breakfast offered at most Comfort Inns. They had the normal eggs, sausage, breads, deviled eggs, juices, cereals, waffles, french toast sticks and more. We both fixed ourselves a bit to eat. After checking out, we headed points south, towards our next destination … wherever that turned out to be.

As such, it turned out to be a frisbee golf course which was http://www.pdga.com/course-directory/course/prompton-lake-disc-golf-course. A well designed and laid out course. It was early but it was already in the mid 60’s with little wind and we were looking forward to a nice early round for disc golf.

We did get to check out a few more holes then we played the last time down here (and was so freaking cold and windy, we called it quits after 3 holes the last time).

All holes had both a yellow (shorter distant throw) and red baskets, yes a longer throw. We opted to play the Red baskets, and we got a surprise on hole  13. It was a par 4 at 580 feet or par 5 (yes one more throw) at 968 feet.  Some one’s math sucks here. That’s right folks, 388 farther and only 1 more stork to not only get to the basket, but get it into the basket in only one more throw? Other then this, this is a real nice course to play, or a great park to just stop at to stretch your legs or have a picnic lunch.

From here we headed to our next stop “Baskin Robbins”. Baskin Robbins and Krispy Kremes were the only franchise places I was ok stopping at, as there aren’t any in our area.

We entered Baskin Robbins into the GPS and headed on our way. We had gone some 2-4 miles when my side-kick said “Pepere, I think we have been this way before, and this baskin robbins we didn’t like because it didn’t have many choices”. I said maybe, let’s wait and see. Yes I said this because we were still 12 miles from it and it’s not like we have been here many times before. Heck only 1 other time in the past 2 years, so I wasn’t sure he was remembering right. So another 5 ot 6 miles down the road, I said “you’re right, I believe we have been here before, and it didn’t have many good choices”, but we were still going to stop. We did, we each order a 2 scoop dish, him with French Vanilla and a peanut butter something or other, I order Rainbow sherbet and chocolate. That’s what we ordered, but not what we got:(

He got 2 scoops of Vanilla and I got 2 scoops of rainbow sherbet, I guess we needed to speak a bit louder. Instead of complaining I suggested we eat these and put another one in the GPS, and hope for better luck there. We drove off eating our ice cream and entered the address for another baskin robbins, which was 17 miles in the direction we were headed, so baskin robbins here we come. On the way to this store we were driving down a road with a pretty tall and long white wall, which just seemed a bit out of place. The wall continued and at one point we saw what appeared to be peoples heads popping up and down, yes this made us wonder was it was all about. We ended up getting our answer when we got to the next basking robbins. After ordering and getting what I wanted,  another 2 scoops, this time with World Class Chocolate and Gold Medal Ribbon (I’m the only one who got any as Dominik said 2 scoops in an hour was enough for him), I asked if there was a local park or walkway to walk and burn some of these calories, she suggested a place right near there, and she said we could leave our car there for now:) I also asked her about the big, long white wall coming into town, she proceed to say, that where she was sending us for our walk. Turns out it’s a wall built to keep the water back in the spring or after a HEAVY rain. We went, walked it, and then headed out of town towards our next stop.

Oh,  the walk was nice and the wall was tall and 1/4 or so long, and placed along a curved area of the river that flooded more then the straight areas?

From here we headed south towards Scranton, PA. I wanted to stop at the Scranton Steam Train Museum again and get a new picture of a cool big and old train there, and also at this time, get some new more comfortable shoes / sneakers. The train shown below has seen some wear since I last saw it.

from here it was next door to the Scranton Mall to see about some new shoes for me. I ended up getting some sketchers sneakers, which have memory foam in them. Time will tell but for now they are a lot more comfortable. From here it was on to our next stop, which turned out to be a Kmart, Toys r us, target, any place that sold Ultimate Frisbees, as this is what Dominik wanted to play if we could. Sure thing, let’s go to find a Ultimate Frisbee, which is a bigger frisbee for long throws. W didn’t find much right then, but I said we would look some more after checking into the hotel for the night.

Ok, back to work, and I’ll get back on this later on. Still have Allentown, BIG Grocery Store, More Frisbees, Big Parks, Construction, Construction, and more construction, including a new Amazon building?